The population of Kumba, Meme Division of Southwest Cameroon, have been reprimanded to shun activities that contribute to the depletion of Lake Barombi. Southwest Regional Delegates of Environment, Protection of Nature and Sustainable Development, Tourism and Leisure and Arts and Culture made the call, Monday May 22, 2017, while celebrating the 25th world biodiversity day.

According to Set Ekwadi Songue, Southwest Regional Delegate of Environment, Protection of Nature and Sustainable Development, Lake Barombi is a blend of huge biological diversity, and touristic potentials. He urged the population to jealously preserve the richness the Lake inhabits so future generation will live to savour its potentials. 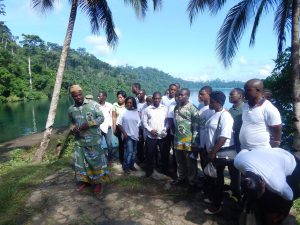 “Lake Barombi inhabits 15 species endemic only in the lake. The lake also serves as a water source for the population of Kumba. Above all, it is a touristic site with great quantities of flora and fauna found around the lake. Unfortunately, certain actions of the population are threatening the existence of these species. That is the reason why we came here, so the population of Meme have to jealously protect the lake for today and tomorrow,” the Regional Delegatesaid.

Corroborating the Southwest Regional Delegate of MINEPDED, the Southwest Chief for information, documentation and sensitisation in the same delegation, Ekwangue Mercy, decried the unsustainable fishing measures carried out by the local population. She highlighted that actions like that will precipitate the extinction of most of the species found in the lake.

“The population of fishes in the lake is fast decreasing because many of the local fishermen catch everything from adult to babies. Some even throw dirt into the lake that kills the living organisms. Some farmers cultivating along the banks of the lake, use so much pesticides on their crops. When rains pour, the surface runoff concentrated with chemicals, narrows into the lake, hence, killing living organisms in the lake. All these habits have to stop for us to have a bright future for the lake” she added.

The Southwest Regional Delegate of Tourism, Efeti Monono, beckoned on the population to desist from destroying the flora and fauna that nature has blessed the Barombi-Mbo reserve. According to her, destroying such biological diversity will deter tourists from visiting the lake and its surroundings.

“We used to have a huge diversity of flora and fauna. Unfortunately, much has been lost because the population tamperred with these species. Now we realise that very few tourists visit this area. So we are calling on the population of Kumba to desist from destroying the huge tourist potentials that we have here at Barombi-Mbo. That 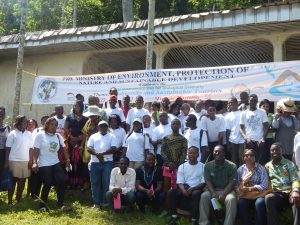 For her part, Southwest Regional Delegate of Arts and Culture, Grace Ewang Ngobisalaka, urged the Barombi-Mbo village in particular and other villages around Kumba, to preserve the cultural heritage, especially some of those cultures that have direct linings to the lake. According to her, most tourists will be attracted to the cultures of the villages adjacent to the lake, when they come visiting the.

Reacting to these calls, the spokesperson for the Barombi-Mbo village, Kakama k. Hans, proposed that the government creates a Village Forest Management Committee (VFMC) to cater for the health of the lake. He also made an appeal for government to stop the water utility company, CDE, from creating artificial blockages to water path. To him, such blockages have accumulated poisonous substances that have precipitated the extinction of six out of the fifteen species, the lake once pride itself to have.

Other activities that marked the day included cultural dances from the Barombi-Mbo community, sight-seeing into the Lake Barombi, and tasting of the exquisite Lake Borombi fish delicacies.

Celebrated under the theme “Biodiversity and Sustainable tourism,” the event also brought together lovers of nature in Southwest, and villagers of Barombi-Mbo tribe.

Impact of COVID 19 on agricultural productivity in Nlonako Landscape

ASLO is not a disease!

The Earth does not belong to man; Man belongs to the Earth

The Unyoking Of Yoke Power Plant